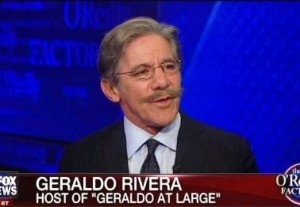 Geraldo Rivera may not like how Al Sharpton‘s lobbying forced the “weak” case against George Zimmerman, but on Bill O’Reilly‘s show tonight against the idea that Sharpton’s been exploiting the case and Trayvon Martin‘s death for his own benefit. They clashed a bit when O’Reilly continued pressing Rivera to give a straight answer on whether his motives are pure or not.

O’Reilly declared that people have had enough of Sharpton, showing a clip of him saying that Stand Your Ground laws need to be repealed in order to prevent future Trayvon Martins. O’Reilly told Rivera the perception of Sharpton is that he’s a “selective cherry-picker who’s doing this for his own self-aggrandizement.” Rivera defended Sharpton as the “premiere civil rights activist of the 21st century” and called him a fair man who brings national attention to important minority issues.

O’Reilly directly asked him, “Is he exploiting Trayvon Martin’s death or is he analyzing it in a fair way.” Rivera started to answer that Sharpton latched onto an issue that touched a nerve with the black community, but O’Reilly interjected to say he was “dancing,” pressing him further to answer.

Rivera allowed that Sharpton is “exploiting” the case in the sense that he is commercially bringing it into the limelight, but continued to defend his motivations in doing so. O’Reilly skeptically asked if Sharpton’s motives are pure. Rivera shot back that they’re “much more pure than you give him credit for.”