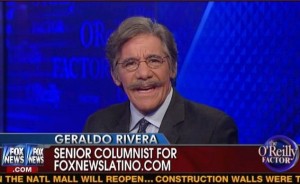 On tonight’s O’Reilly Factor, Laura Ingraham invited on Geraldo Rivera to react to last night’s incredibly hilarious and unbelievably confusing speech by Clint Eastwood at the Republican National Convention. Rivera was completely befuddled by Eastwood’s embarrassing display, and said it would have been better if the speech had been shorter.

Ingraham said she loved Eastwood’s speech for how much it excited the crowd and how much it riled up liberals. Rivera first referenced his own contentious history with chairs before pointing out that Eastwood’s “buffoonery” completely eclipsed Mitt Romney‘s acceptance speech for the Republican nomination last night.

Rivera said that if Eastwood had cut his rambling down instead of going on for over ten minutes, it would have seemed more coherent. Ingraham agreed that it could have been shorter, but argued that Eastwood was better sticking with the improv as opposed to reading off a prompter. Rivera suggested that the night of Romney’s nomination was not a time for levity, but Ingraham disagreed, saying “the country needs to laugh.”

Ingraham challenged Rivera over whether he’s had similar reactions to liberal celebrities supporting Obama. Rivera said Eastwood’s politics didn’t bother him, it was off-putting for him to “be making sex jokes about the president of the United States.” He added that Eastwood’s attempt at humor wasn’t even that clever.