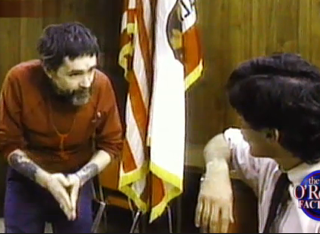 With the weekend coming in and the news cycle winding down for the holidays, the periodic crime story that deranged murderer Charles Manson, now 77 years old, is up for parole again has once again taken away headlines. On last night’s O’Reilly Factor, Geraldo Rivera used the new developments to share his unique experiences with the killer, telling Juan Williams what his extended interview with Manson in 1988 was like, and how the killer threatened to behead him.

RELATED: Geraldo Doubles Down On The Factor: ‘Parents, Don’t Let Your Kids Go Out Wearing These Damn Hoodies’

“He has a magnetic macabre personality in the way, I suspect, Hitler had a magnetic personality,” Rivera told Williams, noting that he had no mercy for Manson, and it “would have been better for them to execute him… he richly deserved to die.” Williams asked Rivera whether he was afraid of the experience, whether Manson was as scary up close as his reputation. Rivera replied with an anecdote: sometime in the middle of the interview, Manson told him, “if I don’t like the way this interview is going, I’m going to get your head handed to your wife in a basket.” Rivera replied, in an interview that happened shortly after an attempt to burn him because of his affiliation with the Aryan nation, “I’ll have the Mexicans light you on fire again.”

Ultimately, Rivera described Manson as tiresome, not interesting. “When you stare evil in the face, all you’ve got to do is checked them out to see they’re just empty windbags,” he told Williams. He wouldn’t interview him again, either: “I’ve had enough,” he argued, for a lifetime.