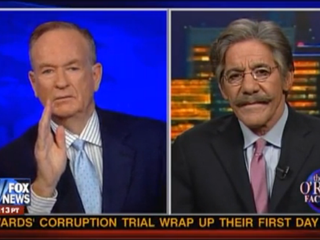 Geraldo Rivera is not letting Trayvon Martin‘s wardrobe escape scrutiny as the court begins work on the George Zimmerman trial, calling his black hoodie “thug wear.” On The O’Reilly Factor last night, Rivera dismissed the THC in Martin’s bloodstream as a serious issue, but once again noted that, given his size and wardrobe, he considered it reasonable for Zimmerman to think Martin could be a criminal, something Bill O’Reilly was quick to call profiling.

“The marijuana is probably a lot less powerful than the surveillance video at the 7/11,” Rivera told O’Reilly, explaining that the video shows that Martin was “dressed in that thug wear– look at the size of him, he’s not a little kid.” Rivera found the defense position in the case much easier than the prosecution, because “if this young man was a stranger to George Zimmerman, Trayvon Martin looks just like people who had been burglarizing and victimizing that neighborhood for the past 6 months.”

“But you’re racially profiling!” O’Reilly objected, clarifying later that he was “playing Devil’s advocate.” Rivera thought profiling based on “a reasonable comparison” was fair, and that the prosecution would have a problem given that Zimmerman had been overcharged “based on the enormous pressure she was under from every civil rights activist in the United States, including the President.” He did not think it was unfair to conclude that “both these guys were trying to do the right thing.” “I don’t know,” replied O’Reilly, suggesting that Zimmerman could have been “looking for action… he wants to be Inspector Clouseau.”