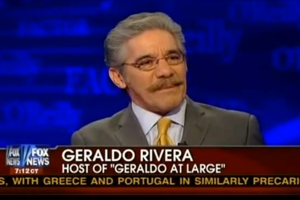 Lest anyone believe that there is away around the TSA’s new anti-terror screening, Geraldo Rivera is here to set the record straight: even celebrities get their junk touched. Rivera visited Juan Williams on the O’Reilly Factor last night to share his recent flying experience: “they say ‘Hi, Geraldo,’ and then they proceed to give me the most invasive, insulting, intrusive body pat down.” No one is safe.

Needless to say, Rivera is severely unhappy with the system as it exists not because it is intrusive, though that seems to bother him, too, but because it is a waste of time. “It is not results-oriented,” he tells Williams, “it is form-oriented.” Rivera goes on to further explain that, despite being fairly recognizable and flying often enough that, even if he weren’t famous, he would be well-known at his home airport, he always gets an extra round of security clearance (something like this, we imagine?) because of his titanium knee replacement.

To streamline the system, Rivera suggested “criminal profiling”– saving the junk-grabbing for people who exhibit significant risk factors and letting those least likely to pose a threat through. Specifically, Rivera argued that frequent fliers should not be submitted to the searches every time they fly. He also noted that “synagogue and church groups” should catch a break as “classes of people for whom the prospect of terrorism is infinitesimally remote,” though he seems to have left out a fairly obvious group in that category that many may argue actually merit an even more thorough search– mosque groups.

While Williams didn’t pounce on that omission, he did note that there were going to be categories of fliers that would be targeted more often than others, and that most Americans accepted the current system because “it makes us safer.” Rivera argued that most of those Americans were likely to not fall under the category of those “for whom commercial aviation is a fact of their life”– the group Rivera was most adamant to protect. That said, knowing that there would be ethnic groups more likely to be searched offended Rivera, despite what he considered a need for such measures, but it wouldn’t be the first time Rivera experienced something similar: “I’m offended like I was offended during the drug war when my mustache made me the person who was targeted.”

The discussion from last night’s O’Reilly Factor (hosted by Williams) via Fox News below: