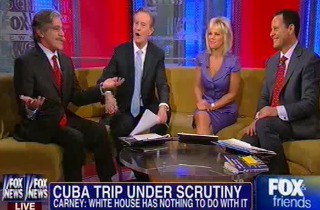 On Friday, Geraldo Rivera tackled the controversy surrounding the artists Jay-Z and Beyoncé’s recent trip to Cuba on Fox & Friends. Rivera laughed off concerns of conservatives, like Sen. Marco Rubio (R-FL), who said the trip was inappropriate and the result of political favoritism from the White House. The Fox News Channel host said that Jay-Z and Beyoncé help effect change in the Cuban regime by showing average Cubans how Americans live in a capitalist society.

After Jay-Z rapped about the White House giving him clearance to go to Cuba, White House Press Sec. Jay Carny clarified that it was the Treasury Department which gave Jay-Z final approval to travel to the island nation.

“I think that to question the literal accuracy of Jay-Z’s lyric is to overlook the fact that the Treasury really answers to the White House,” Rivera observed. “I believe that Jay-Z’s trip was absolutely legal.”

“I believe that the response of Sen. Marco Rubio, who I like, to compare this virtually – this trip, this tourist trip – to terrorism was way over the tip,” River continued. “It is way past time for us to reassess our relationship with Cuba.”

“We’ve made friends with communist China. We do business with them,” he added. “Vietnam – we lost 50,000 soldiers and we have normal relations.”

“What if you had a relative rotting in prison there because they spoke up?” asked Brian Kilmeade.

“But the way to loosen them up is to expose them to freedom,” Rivera shot back.

“Jay-Z and Beyoncé showed the good life to millions of Cubans who will envy America as a result,” asserted Rivera. “It was a harmless trip and the reaction was way over the top.”