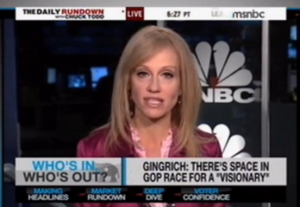 On Monday morning, Kellyanne Conway, an adviser to Newt Gingrich, and Alice Stewart, Rick Santorum‘s press secretary, took to MSNBC to discuss where their candidates stand in the primary race — and to address Mitt Romney’s assertion that it is mathematically impossible for them to win. Both campaigns quickly dismissed Romney’s math, sticking to storyline that he’s simply not conservative enough.

The conversation, unsurprisingly, turned to possibility of a brokered convention. Conway said Romney supporters have to come to grips with the situation “where you nominate the guy who lost the previous time — who is not a conservative, who conservatives in the party do not think of as one of them — and you end up with what situation, you lose to a Clinton or Obama. And conservatives are not going to allow that. So I think an open convention is a dream for many voters, and they may get their wish this year.”

Asked about the Santorum campaign’s preference for a two-man race, Stewart said:

Well, we will certainly never ask for Speaker Gingrich to get out. That’s up to the people to decide. But more and more we’re seeing that the people are speaking their mind. Rick has one seven contests so for, virtually tied another, and Speaker Gingrich has a long way to go to catch up.

Host Chuck Todd did, of course, mention the rumors about Gingrich picking Rick Perry as a running mate — and whether Gingrich would choose a running mate during the primary race. Conway said the option is not off the table: “It certainly is possible, Chuck. I think it’s wise to transport the voter into the first day, first week, first month, first year of the Gingrich presidency so we can get out of this process we’re in right now.”

A taste of a Gingrich presidency. Something to look forward to.