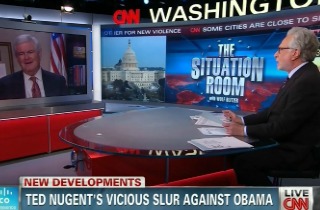 The host of CNN’s Crossfire, former House Speaker Newt Gingrich, took a swipe at the “remarkably selective” outrage on his own network over rock star Ted Nugent’s offensive comments about President Barack Obama.

Nugent recently sparked controversy when he called Obama a “subhuman mongrel.” On Tuesday, CNN anchor Wolf Blitzer spent several segments dissecting Nugent’s comments on Obama and their origins in Nazi Germany. Gingrich later joined Blitzer and tore into what he said was the network’s failure to call out Democrats for similarly offensive remarks about their political opponents.

“The outrage isn’t so much, from my perspective, Ted Nugent says a lot of crazy, vile slurs over the years,” Blitzer said. “The outrage really is that the Republican candidate for governor of Texas, Greg Abbott, is willing to embrace him, invite him to go out on the campaign trail after he calls the President of the United States a subhuman mongrel. Would you do that if you were running for office?”

“No, but I always love selective media outrage,” Gingrich replied.

“The Saturday before the 2000 election, Al Gore went to a black church and charged that George W. Bush would appoint judges to return blacks to be counted as three-fifths of a person,” the speaker continued. “In 2012 Vice President [Joe] Biden went to a black audience and said if the Republicans win within 100 days, they will put you back in chains.”

“Now why isn’t there some accountability for tremendously outrageous, vicious, and racist statements by Democratic elected officials, not just entertainers?” Gingrich asked.

Blitzer challenged the Crossfire host on the Nazi origins of Nugent’s attack on Obama, which resulted in a tense back and forth over whether CNN has appropriately called out Democrats and their allies when they issued similarly excessive rhetorical attacks on their opponents.

“I would love to have the media condemn a major Democrat for some of the vicious things they have said,” Gingrich said. “I have never seen it done. I don’t expect to see it done in my lifetime.”

“I think this is entirely selective outrage,” he concluded. “I think what he said was wrong and he shouldn’t have said it. But I also think that the outrage is remarkably selective.”