Gingrich Doubles Down On Ignoring Judicial Decisions: ‘Are Judges Above The Rest Of The Constitution?’ 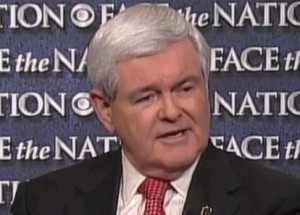 Newt Gingrich has now put his crusade against judicial activism at the forefront of his presidential campaign. Over the past week, he has argued that if elected president, he would opt to ignore certain judicial rulings if he determines the decision is not within the authority of the court. He has been attacked by Constitutional scholars and lawyers over his position, and on Face The Nation today, Gingrich defended his position to Bob Schieffer.

Gingrich cited a ruling several months ago where a judge did not fall on the side of public prayer in schools, branding it as a sign of “anti-American dictatorship.” He suggested impeachment as one course of action for judges who are not in line with American values as Gingrich sees it. He went after the modern court system for “a fundamental assault on our liberties,” and claimed the intention of the Federalists who drew up the blueprints for American government wanted the judiciary to be the weakest branch. Gingrich cited past presidents like Andrew Jackson and Abraham Lincoln who asserted their executive authority over Supreme Court decisions. In the case of the latter, Gingrich cited Lincoln’s opposition to the Dred Scott decision.

Schieffer questioned the natural extension of Gingrich’s position, and how a president could decide which Supreme Court decisions he could follow and which he could not, because at some point the law of the land has to be firmly established. He cited Brown v. Board of Education as a Supreme Court decision that, while coming down on the side of school integration, was not necessarily a popular one. Gingrich shot back by referencing Dred Scott once again, and also cited another contemporary example of a court that ruled the phrase “one nation under God” in the pledge of allegiance was unconstitutional.

Then, of course, the conversation made its way to a hypothetical regarding President Obama. The Supreme Court is taking up the health care law in its docket next year, and if they throw it out, Schieffer wanted to know if it would be appropriate for Obama to reject the court’s decision and keep it as a law anyway. Gingrich doubted it, because Congress would not let him, and made an interesting comment about how he believes checks and balances works.

Schieffer cited two attorneys general from the Bush administration who disagreed with Gingrich’s view and believed it would reduce the judicial system to a “spectacle.” Gingrich conceded that many lawyers would find his view “frightening,” but he would hold judges accountable if they made decisions he believed were not in concert with American values.