Gingrich Slams Dem Scare Tactics On Fiscal Cliff: It ‘Is An Artificial Invention Of Washington’
video

Gingrich Slams Dem Scare Tactics On Fiscal Cliff: It ‘Is An Artificial Invention Of Washington’ 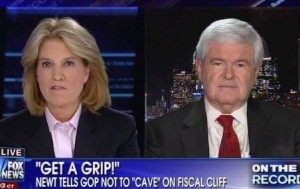 Newt Gingrich sat down with Greta Van Susteren tonight to discuss the current negotiations between Congress and the White House over the impending “fiscal cliff.” Van Susteren asked Gingrich to explain his earlier remarks advising the GOP to “get a grip” and stop trying to negotiate with President Obama. Gingrich dismissed the fiscal cliff language as attempts to create a climate of fear, saying Congress could easily tackle every issue like multiple “foothills.” He decried Democratic scare tactics, which he boiled down to: “if you don’t vote for this, we’ll go over the cliff.”

Gingrich criticized Obama and the Democrats for not seriously addressing spending cuts while mostly focusing on tax rates. He quipped that if someone made a dollar for every time the phrase “fiscal cliff” was repeated in Washington and in the media like a “mantra,” they would be a millionaire. He said that the “entire fiscal cliff is an artificial invention of Washington” created by Obama and Democrats in Congress.

Van Susteren brought up the potential consequences of going over the cliff, though she did point out that the inability of the president and Congress to come to an agreement last year helped delay the negotiations until this deadline. Gingrich proposed extending the deadline an extra ninety days and coming up with a deal that seriously addresses entitlement reform, decrying the current proposal as a “bad deal” for the country.