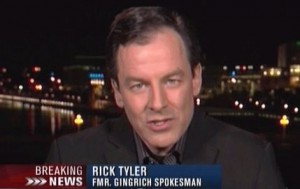 In a fiery tête-à-tête, Senior Adviser to pro-Newt Gingrich Super PAC, Winning our Future, Rick Tyler lit into Rachel Maddow and other MSNBC panelists for suggesting Newt Gingrich was sending a dog whistle in his speech criticizing President Obama for singing. “That’s baloney!” Tyler exclaimed. “MSNBC needs to get off this race-baiting kick, if you want to talk about race, the Republican Party was started by Abraham Lincoln. Six of the nine planks in the 1856 platform were civil rights platform. If you go back to the Democratic platform, it’s a racist platform. We can go down this road!”

“There’s a pattern here of very obviously racially-coded language,” Maddow replied. “That has nothing to do with the parties in the civil war!”

“I don’t understand this!” Tyler sniped. “The president sings, the president — Newt Gingrich makes a little thing, and all of a sudden it’s a racist thing! More people are on food stamps today because of Barack Obama. They fail in the schools, you can ask Al Sharpton! The Democrats have failed in the public schools with the African-Americans, they abort their babies, they’ve done nothing to lift them out of poverty!”

Sharpton angrily responded to Tyler’s remarks. “(Newt Gingrich) said, and I’m quoting here, that he would ‘go to the NAACP and tell black people to stop being satisfied with food stamps,'” Sharpton replied. “He didn’t say people on food stamps, he said black people!”

Watch the heated interview below via MSNBC: