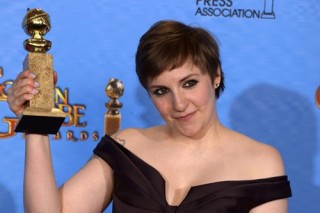 The whole Nazi analogy is becoming all-too-common when attempting to make a point in today’s world. The latest example of scholarly thought comes from Lena Dunham, writer-director-star of HBO’s hit-without-viewers Girls.

The controversy around the supple 26-year-old’s comments came after the show was accused in several circles as being racist for having a cast whiter than the President’s cabinet (a cast that includes NBC’s Brian Williams’ daughter).

Dunham at first defended her decision, stating she wanted to “avoid tokenism in casting,” adding that she based the show on her own experiences, and those moments didn’t include anyone of color. Fair enough.

But despite the explanation she still faced pressure to fill a fictitious quota, and so the predictable caving commenced in the form of Donald Glover, an African-American comic/writer who is now cast as a Lena’s love interest and (gasp) a Republican. Melissa Harris-Perry and most of MSNBC will be appalled.

The interviewer actually followed up, well…kinda, “Wait, so your position is that you shouldn’t date a Republican?”

“My personal position is that you should date anyone you want so long as they treat you respectfully and share your value system,” she said. “So it might be hard for me to date someone who was against gay marriage and abortion rights—I don’t think I would be attracted to them—but I don’t have any personal problem with dating a Republican. I do think that Hannah has this reverse ignorance where she’s like, If they’re Republican, get them out of my airspace, and that was a fun thought to explore.”

In other words, mock the black Republican through her character’s ignorance. Make him a figure you love to hate.

So where to begin…

Let’s start by sharing the legacy of the Nazi party. I just finished reading Man’s Search for Meaning by Dr. Viktor Frankl, a painfully-detailed account of his experiences at a concentration camp and his psychotherapeutic process of attaining a reason to live. It was voted one of the ten most-influential books of the 20th Century…a must read.

Until reading the book, my general knowledge of Nazi concentration camps was that Jews were sent there to be killed swiftly. Some were put to work to help the war effort, but it was mostly a massive death row and quick executions.

But Frankl describes just how evil the Nazi regime was to its captors in terms of the murder process. Millions were worked relentlessly for months with little food or water, and with barely a stitch of clothing. Daily beatings by guards. Rampant disease and illness. Even Cannibalism. And only after an inmate could no longer serve a productive purpose because of illness or injury were they marched to the ovens and gas chambers for death…all while having no idea if other family members imprisoned were still alive.

Reflect on that existence for a moment. And after doing so, ask yourself if anyone should ever dare to compare any person or American political party—regardless if it’s Republican or Democrat—with the most sinister, evil, cruel collection of human beings the world has known. Besides, it’s a pointless attempt in making any argument, because once the word “Nazi” is broached – even if it’s only for hyperbolic effect, anything said afterward is completely ignored.

Outside of a few conservative outlets, not a peep has been said or written about Dunham’s comment. In fact, the New York Daily News failed to mention it at all, instead focusing on Howard Stern’s candid perspective on the show and its star:

Stern (on his radio show): “I learned that this little fat chick writes the show and directs the show, and that makes sense to me because she’s such a camera hog that the other characters barely are on…(Dunham) is fat girl who kind of looks like Jonah Hill…she keeps taking her clothes off and it kind of feels like rape.”

The Daily News would go on to call Howard “a big, fat meanie,” for saying something so appalling.

Could you imagine if African-American Stacey Dash, co-star of the classic Clueless and one of the few conservatives in young Hollywood, had applied the same comparison with the Democratic Party?

Another troubling aspect of Dunham’s thought process is that all Republicans are pro-choice and against gay marriage.
If that is the mindset, at least on the gay marriage issue, how could Dunham have possibly voted for Barack Obama in 2008? Because the record shows that up until about ten minutes before the 2012 election, Mr. Obama was against gay marriage before deciding he was for it.

There was also a pro-choice, pro-gay marriage Republican in office while Dunham lived in New York (Brooklyn) in the form of Mayor Rudolph Giuliani.

So wait, like, is he an undatable member of the Third Reich too?

The good news is that the show isn’t exactly putting asses in the seats: 1.1 million viewers were its average for Season 1, which would be OK if shows like the great Game of Thrones wasn’t pulling down 4.2 million viewers and setting the bar at a certain level.

As of now, a third season of Girls hasn’t been signed off on.

Lena Dunham: The vapid voice of a new generation.