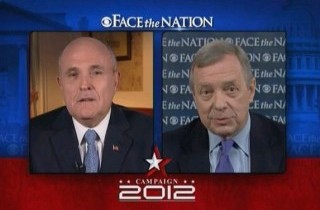 Sunday morning on CBS’ Face the Nation former New York City Mayor Rudy Giuliani and Senator Dick Durbin (D-IL) battled over Vice President Joe Biden‘s recent string of perceived gaffes and whether he is “competent” to serve as president, should he ever need to take on such a role.

“After not knowing what state he was in, not knowing what century he was in in 24 hours, and making what i would consider to be an absolutely disgusting appeal to racial sentiment,” Giuliani said, I wonder if he’s got the mental capacity to be the President of the United States.”

“Is that campaign talk or do you really think he’s nuts?” asked host Bob Schieffer.

“I don’t think he’s nuts,” responded Giuliani. “I’m just saying i wonder if he has the kind of balance.”

“If this was Cheney or Sarah Palin, or Dan Quayle,” the former mayor continued, “my goodness, all you guys on television would be going crazy about how could he say this and what’s wrong with him?”

“I know Joe Biden,” Sen. Durbin fired back. “Joe Biden is my friend. And Rudy Giuliani, that isn’t fair. What you said has gone too far.”

Durbin then reiterated the recent Obama campaign talking point about the Republican Party’s own history of vice presidential picks: “If you’re going to put yourself out as the arbiter and judge of vice presidential candidates, we’re going to remember that four years ago you told America at the Republican Convention that Sarah Palin should be the Vice President of the United States, she was ready to be Commander-in-Chief and President of the United States. That speaks for itself.”

“I think Sarah Palin actually is operating at a level quite a bit above Joe Biden,” Giuliani defended the former Alaska Governor. “Last week, [the “chains” remark] was an absolutely blatant appeal to racism…. Joe Biden is going too far.”

Durbin responded that “there isn’t a racist bone in Joe Biden’s body” and accused Giuliani of “taking it to extremes.”