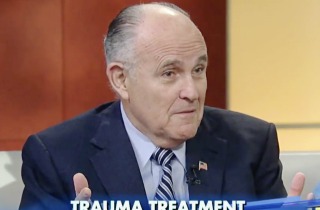 Rudy Giuliani is clearly not impressed with college students and protesters that have turned out in force to condemn Donald Trump‘s election victory.

The former New York mayor was on Fox & Friends on Thursday morning, where he was asked to react to protesting students and the colleges that have offered them measures to help deal with the disappointment. After joking that that wasn’t the treatment he would’ve gotten at Manhattan College, Giuliani said the truth of them matter is that these student protesters “are a bunch of spoiled crybabies.”

Giuliani went on to say he doubts that most students are actually against Trump, and that there’s a swelling of conservative students challenging liberal professors and “the real left-wing loonies on the campus.” He stated that Trump has appealed to more students than people give him credit for, though Giuliani suggested that Trump might want to ask younger dissenters to step back and re-evaluate him.

"They're a bunch of spoiled crybabies." – Rudy Giuliani reacts to colleges pandering to students upset by the election by canceling tests pic.twitter.com/4ZtA67kNMB

“Take a while and evaluate my presidency a year from now. My advice to Donald would be to say that,” Giuliani said. “Give me a year and I think you are going to find you are living in a much better country than you are living right now. If not, I don’t know, you can go cry then.”

Hillary Clinton loyalists and those alarmed by Trump’s campaign manager have launched nationwide demonstrations against Trump ever since Election Night. Trump, Clinton, and President Obama have all given speeches requesting that people respect the elections outcome and come together as a country.