Giuliani Repeatedly Demolishes Chris Hayes Amid Attempts To Discredit Him 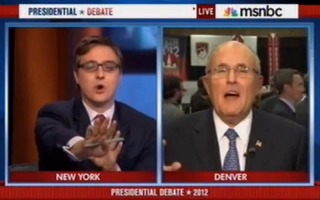 Former New York City Mayor Rudy Giuliani spoke with the panel on MSNBC following Wednesday night’s presidential debate where he got into a heated argument with MSNBC host Chris Hayes.

Hayes asked Giuliani if he thought it was correct that Mitt Romney’s position was still to pursue an extension of the Bush tax cuts “which would, of course, cut taxes for high income individuals.” He said that Romney indicated that he would not extend those cuts.

“They’re set to expire,” Hayes replied. “It was your party that set them to expire. I didn’t do that. I was sitting here at the desk.”

Giuliani called Hayes’s contention an “accounting matter,” which Hayes took issue with. Giuliani said that if the tax cuts did expire, he would pay the same amount as he paid under those cuts.

“Because you make a lot of money,” Hayes shot back. “You are – to your great credit – a high earning individual and of course you will see a large bounty from this tax cut.”

“Stop the ad personam silliness,” Giuliani replied. “Will you let me finish my answer instead of yelling and screaming at me?”

Hayes said he wanted to clarify that Romney still wanted to extend the tax cuts for high earners. “For everyone,” Giuliani replied. Giuliani insisted that he did not want to give more revenues to government to “feed the beast.”

Hayes asked coyly if the Department of Homeland Security qualifies as “the beast.”

“I have no contact with the Department of Homeland Security,” Giuliani replied tersely. “One more try on an ad personam attack — doesn’t work.”