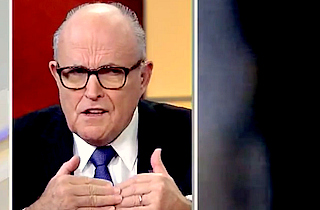 Former Gotham Mayor Rudy Giuliani told Fox & Friends Thursday morning that the grand jury decision not to indict NYPD officer Daniel Pantaleo was likely correct, and that current Mayor Bill de Blasio had incited protests with his comments about the years of racism leading up to the choking death of Eric Garner.

“This helps to create this atmosphere of protest, and even sometimes violence,” Giuliani said. “There was no racism in this case. There was no indication that if this man was a white man of the same size resisting arrest, the same thing would happen.”

De Blasio had said that he had trained his own mixed-race son in how to deal with police officers. “If he wants to tell his son to act appropriately with police, everybody should!” Giuliani responded. “I was always told the policeman’s always right. There’s a good reason for that: he’s got a gun.”

“If he wants to train young black man in how to avoid being killed in this city…you should spend 90% of your time talking about how they’re actually going to get killed, which is by another black,” Giuliani continued. “To avoid that fact is racist.”

Giuliani, natch, sounded fine with the grand jury’s decision. “I don’t know all the facts, so I would have to withhold judgment,” he said, noting that the district attorney was good friend of his, “[but] I have to imagine this case was presented in a very professional way, and reached a verdict they felt was right.”