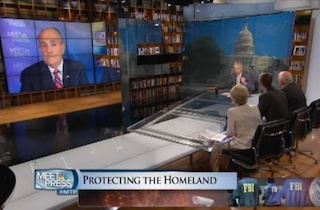 “We have to recognize we are still in a global war against radical Islamic jihadists,” Rep. Tom Cotton (R-AR) asserted. “And the president, by his policies and by the words of senior officials in his administration, are removing us from a war footing and putting us back into a law enforcement model.”

Later in the segment, as Sen. Patrick Leahy (D-VT) grew defensive in response to Cotton, Gregory noted that “signals of radicalization” were missed in the case of the Boston bombing, eventually going on ask: Do “we need to sacrifice privacy in order to be safer? Is that going to be the immediate lesson from the Boston bombings?”

Former Rep. Jane Harman argued in favor of more camera surveillance — but Gregory quickly moved to the question of racial profiling. ” Is there cooperation in the Muslim community?” he asked. “Or is it greater tracking and monitoring in mosques and in the Muslim community, to detect what was missed here with Tsarnaev, who apparently was challenging his imam and all the rest?”