Glenn Beck, ‘A Cannibal,’ Eats A ‘Weiner’ On The O’Reilly Factor 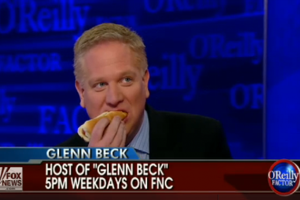 Early last week, New York Congressman Anthony Weiner accused Glenn Beck of fraud in combination with one of his most popular sponsors, Goldline. Those who guessed Weiner would become a chalkboard regular were wrong; Beck reverted to his morning zoo radio roots and dedicated a website to the Congressman… and hot dogs. And yesterday, on his regular visit to The O’Reilly Factor, he even brought a wiener along to consume on the air, to advertise his #1 Google-searched site, WeinerFacts.com.

Bill O’Reilly called him a “cannibal” for eating a Weiner homophone on TV, but Beck called it pure coincidence, and responded to an accusation of being immature by pointing out that, regarding Rep. Weiner’s accusations against him and Goldline, “a lot of Weiners do that. Did you know that, technically, he’s the only Weiner in Congress?”

Beck finally settled down and got semi-serious, noting that Goldline is a company he trusts and that Weiner does not exactly have a clean economic slate, either: “Here’s a guy, who one of his main people used to work for Media Matters– which is great– but also, here’s a guy who’s trying to tell an A+ Better Business Bureau-rated company how to do business when he has been nailed twice for financial improprieties.”

O’Reilly took on a paternal concern over Beck when he read that Weiner had been to the White House to chat with the President, worrying that there was an concentrated effort against him. “That’s not a joke, Beck,” he scolded, “Then I have to get in and defend you!”