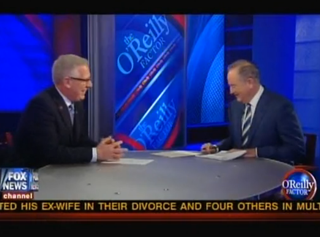 Glenn Beck‘s weekly appearance on the O’Reilly Factor today had just enough space for what seem to be the only two stories the media is talking about: the 2012 Republican field and the scandal surrounding Rep. Anthony Weiner. Beck and Bill O’Reilly took the time to evaluate the former, but not for long before they were discussing the potential hacking of a U.S. Congressman, and the relatively small amount of easy jokes make at Rep. Weiner’s expense.

In what is now officially one of the final “At Your Beck and Call” segments of the O’Reilly Factor, the duo took some time to the latest official 2012 Republican candidate to enter the fray, former Massachusetts governor Mitt Romney and the fact that Sarah Palin had decided to travel to New Hampshire on the day of his announcement. O’Reilly didn’t seem to take Palin’s “little bus tour” too seriously as a 2012 threat, and Beck agreed that he wasn’t seeing Palin running anytime soon (though he did correct the “little bus tour” jab). Beck did note, however, that he considered that her appearance “wasn’t exactly helpful” to Romney, but gave a disclaimer to all his opinions: “the one thing I’m wrong about all the time? Politics.”

O’Reilly then made a smooth transition to “Weinergate” by joking that Romney was now claiming his health care reform as governor only occurred because he had been “hacked.” After a few “can’t say with certitude” jokes, both Beck and O’Reilly noted that Fox News had avoided, in their eyes, most of the inappropriate “Weiner” jokes that are out there. “We haven’t had one bad pun!” O’Reilly proclaimed, noting that Rep. Weiner had a bit of a tempestuous relationship with Fox’s Megyn Kelly and had called for investigations into Goldline, one of Beck’s major radio sponsors. “You had every reason in the world,” O’Reilly told Beck, to indulge in the jokes. Beck shrugged that off, saying “I gave him the benefit of the doubt until yesterday.” Both Beck and O’Reilly dismissed the moral issues surrounding the potential picture message, instead taking the national security angle. “The Chinese are over there!” O’Reilly proclaimed, while Beck added that “if it was hacking, we should know– not us, the government should know, and that guy should go to jail.”