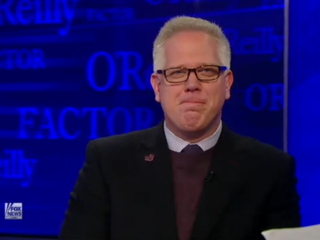 “This is why we’re not invited,” an amused (and sometimes confused) Bill O’Reilly told Glenn Beck Friday night as they attempted to decipher what the guests at this week’s Chinese state dinner were actually eating. After an extensive analysis that included trying to uncover the mysteries of fennel (“I don’t know what that is!”) and black trumpet mushrooms (“that’s a mushroom that plays an instrument?”), the pair decided maybe it was best they were left out.

Beck and O’Reilly had a blast roasting every single item on the menu for the night, with O’Reilly concluding that “this is 90,000 calories” and Beck being in shock at the sheer amount of money being spent. “If you were going to someone’s house that owed you a ton of money,” he argued, maybe it was time to “go down a level than what you can afford”? Rather than being lavish in front of the Chinese, he argued, a little modesty would have been in order. Not to mention what Beck considered comical attempts at racial pandering– namely, inviting celebrities like Jackie Chan, Yo-Yo Ma, and Vera Wang to the dinner. “Wang Chung is going to perform in just a few minutes!” he joked. After a good deal of jesting, O’Reilly definitively concluded it was clear why “they don’t let us barbarians in.”

Beck and O’Reilly also discuss the recent ban on the word “crosshairs” on CNN– Beck notes that, when he worked there, he was allowed to use the word–and the further push for civility in discourse that has them both raising eyebrows.

The segment from last night’s Factor via Fox News below: