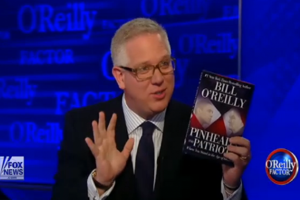 Whenever Glenn Beck and Bill O’Reilly appear together, it doesn’t take long to find an issue on which they disagree (for example, O’Reilly is not overly concerned about the biblical vermin invading the White House). On last night’s Beck “casual Friday” appearance on The O’Reilly Factor, they delivered their classic banter, this time on why Beck thinks he is not the leader of the Tea Party movement nor Barack Obama the leader of America.

O’Reilly names Beck, along with Sarah Palin, as leaders of the Tea Party movement in his new book, Pinheads and Patriots. Beck first takes issue with calling famous left-wing donation machine and conservative Bogeyman George Soros a “pinhead” (“if Soros is in it,” Beck offers, best to “rename it Angels and Demons”). “You and I are in simpatico on this one,” O’Reilly offers hopelessly, trying to explain the issue is one of semantics. Then Beck reads an excerpt from the book referring to him, and objects to the label “Tea Party leader”– “I’m not leading it.”

O’Reilly doesn’t back down, despite being forced into the awkward position of having to use compliments to challenge Beck’s point. “People love you,” he contends, “and by example you and Sarah Palin have stimulated the tea party… in the hearts and minds, you’re one of the leaders with Sarah Palin.” Beck responds that “people need to stop looking for leaders of the Tea Party” and offers O’Reilly this example: “If I said to you ‘Who is the leader of the United States of America… ?” O’Reilly responds that President Barack Obama undoubtedly is, but no! “By definition, it should be ‘We the People.'”

At this point, O’Reilly mostly gives up and, in the typical schoolmaster-esque form he tends to address Beck when he finds his points facetious, advises him to “be proud of it– it’s one of the few things you can be proud of!”

The video from last night’s Factor via Fox News below: