Glenn Beck And S.E. Cupp Agree That GOP Must Accept Gay Marriage, But How? 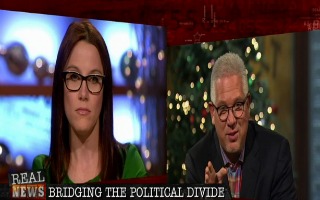 On Wednesday night’s Real News on The Blaze TV, S.E. Cupp and Glenn Beck engaged in a strategy session focusing on ways to move the Republican party forward in the wake of 2012’s losses. Their conversation centered around the GOP’s historic opposition to gay marriage – both agreed that the party of Lincoln must find a politically amenable solution to move party towards accepting, if not embracing, same-sex marriage rights. In the process, however, Beck became somewhat vexed over the real and persistent problem that religious objections to gay marriage pose to formulating a policy that accepts the practice. Beck noted though that the answer to this problem lies in the Constitution – and he is correct. The answer lies in federalism and the Republican party’s historic and nearly universal embrace of a simplified tax code.

RELATED: How The GOP Becomes The Party Of Gay Marriage

Cupp began the broadcast by detailing a proposal she recently expressed on MSNBC’s The Cycle, and wrote about in more detail in her column in the New York Daily News, in which she laments that the Republican party has actively alienated many of the groups that voted against the GOP in droves this past November. Having identified the problem, she turned to Beck for his thoughts on the solution.

“What do we do – and by ‘we,’ I mean conservatives, because I feel strongly that the answers are not going to come from Republicans and the party, but conservatives – what do conservatives do going forward to take back this message,” Cupp asked.

Beck detailed on his chalkboard a spectrum of political freedoms and detailed where voters stand relative to Republicans and Democrats in Washington. He found that most voters’ beliefs no longer sync with those of their elected representatives.

Beck then turned to the issue of gay marriage. “All we want to do is get along,” Beck said. “Where we unite is here; maximum freedom. The Constitution.”

“The question is not about gay marriage – should they compromise and move farther left,” Beck continued. “The question should be: why is the federal government involved in marriage at all?”

Beck closed by noting that he recently had a conversation with libertarian entertainer and outspoken atheist Penn Jillette. He was encouraged by their agreement on the essential governing principles which would bridge the religious divide between them on the issue of same-sex marriage rights.

Beck noted that the gay marriage does affect his religion because his church is forced, if same-sex marriage is legalized by fiat, to accept a practice that many (Republicans and Democrats alike) find objectionable. The answer to Beck’s quandary is tax code reform.

This proposal was fleshed out in more detail in an earlier post, but the crux of the idea lies in the reality that the federal government has codified marriage into the tax code in the form of marriage deductions. States and municipalities are still responsible for giving out marriage licenses, but the federal government does recognize marriages and provide tax incentives to married couples.

With the Defense of Marriage Act functionally neutered and unenforced, the path is clear for a political solution to the problem of equalizing marriage rights at the federal level by removing the federal government from the equation altogether. A simplified, flatter tax code which eliminates marriage deductions takes Washington out of the business of determining what constitutes marriage in the United States. State and local governments still retain the power to distribute marriage licenses, and the unmistakable trend suggests that same-sex marriage rights will continue to spread as the practice of gay marriage becomes more familiar. With the federal government removed from the debate, the spread of same-sex marriage rights becomes a state-level issue.

The principles of federalism and tax code reform can and will be embraced by even the staunchest of evangelical conservatives with deeply-held moral objections to gay marriage. The party’s more moderate and libertarian elements, while they may appreciate a more proactive approach to the normalization of gay marriage, will be satisfied by the compromise.

By embracing a plan that most of the Republican party’s constituencies can get behind, the GOP becomes the party with a plan. The Democratic party, by contrast, has only the expression of empathy for the plight of gay and lesbian couples who cannot get legally married in their state of residence. The Democratic party is happy to relegate those couples’ hopes on referenda and activist judges to enact marriage equality. That is hope, not strategy. The Republicans, meanwhile, will be able to co-opt the issue from Democrats as the only game in town with a plan to get the government out of Americans’ bedrooms.

This plan need not be passed in Congress to be politically effective – it only has to be expressed and adopted by some of the party’s leading thought leaders. A plan always beats no plan – the United States does not need two liberal parties, and the GOP can become the party of gay marriage by reasserting that it is the party of limited government. The political impact will be dramatic, particularly on young voters and urban and suburban single women – groups the Republican party has historically struggled with, and which happily hammered the final nail in Republican party’s electoral coffin this cycle.

The GOP is getting there. That thought leaders like Cupp and Beck are warming to the notion of a more libertarian approach to the vexing social issues of the day is encouraging. There is plenty of work to be done, but the Republican party’s opinion leaders are on the right track.