Glenn Beck And The Bees: A Night At The “Bold & Fresh Tour” 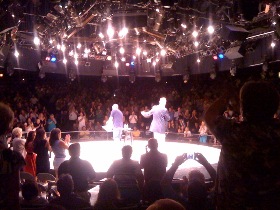 Glenn Beck was talking about bees – specifically, asking the audience at Saturday night’s “Bold & Fresh” tour if they would be surprised to see Pres. Barack Obama one day walk out of the White House, covered head to toe in bees, hovering around him, then shake them off, and see them form the presidential seal behind him.

It was a good laugh line – and the crowd erupted. But it served as the conclusion to a lengthier Beck ‘theory’ about why flies, rats and other insects and rodents appear to be ‘attracted’ to Pres. Obama. Is it because, as his co-star Bill O’Reilly suggested, he is the Antichrist? Well I’m not necessarily saying that, said Beck, smiling. Later in the show, O’Reilly brought it back up and Beck finally relented. “Oh come on,” he said. “I’m completely joking!”

But as I sat in the audience, I couldn’t help but wonder if anyone in the 1,000+ crowd had bought into the complete jokes Beck mixed into his very real, and often convincing, conservative stumping.

Jokes aside, the Bold & Fresh Tour, which concluded its eight-show sold out run Saturday and returns in the Fall, was an entertaining two hours – especially for Fox News obsessive fans making up the audience. Beck kicked off the show, in a short-sleeve collared shirt, jeans and Converse sneakers, spending little time before dropping a “communist revolutionaries in the White House” line to uproarious applause.

He joked about his time at CNN, saying nothing could “kill the joy of working in TV faster.” Then, almost on cue, a woman in the front row who didn’t appear particularly excited to be there revealed she worked for CNN. The crowd booed. She had come to the show bringing her companion (father maybe?) for his birthday. Beck got serious several times during his 25-minute set, concluding with a rousing re-reading of the (like he did in his CPAC speech). “Give ME your TIRED, your POOR,” he boomed, highlighting the patriotism and fighting American spirit the statue represents. 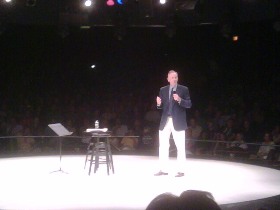 Bill O’Reilly took the next half hour, and his approach was lighter than Beck’s. He joked about Sean Penn and Haiti (mimicking a Haitian resident: “I’d rather live in the tent, just go home Sean!”) and “community activist” Lupe Fiasco (he’s a rapper, actually, but the crowd didn’t seem to realize the mischaracterization). O’Reilly treated it like he was chatting with some friends at the dinner table – very conversational. I guess that’s why “waterboarding” became “dunking” as he discussed torture. The crowd loved O’Reilly, but not to the degree of Beck (although the couple next to me refused to say who they liked more – only that they loved both).

Beck and O’Reilly returned together for a joint segment after a brief intermission. It was essentially a longer verison of the funny/serious back-and-forths weekly on The O’Reilly Factor. Beck talked about his time at CNN again – “Anderson Cooper was nice to me” he noted. He also recounted his first meeting with Larry King. “So, you’re the Mormon,” he recalled King saying. And then there was the talk about bees and rats and “communist revolutionaries” in the White House. It certainly didn’t sound like Beck was joking about that last one.

Every mention of Eric Holder or Joe Biden came with a steady stream of boos and yells. References to voting for O’Reilly’s shoe over Pres. Obama in 2012 were met with applause and cheers. What Beck and O’Reilly said Saturday night wasn’t what made for some uncomfortable moments – but the way some comments were received certainly did. On a much smaller scale, it was like when Sen. John McCain met the Arab Lady – an unspoken realization that, hey lady, you have totally missed the point here.

As the crowd rose to its feet for a standing ovation, one woman in the front row remained notably seated. But she was busy anyway – Glenn Beck had come over to shake her hand.