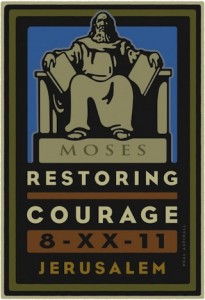 Well, it looks like Glenn Beck wasn’t just checking out the sights in Israel last week, he was making plans. Beck had promised a “big announcement” on his radio show this morning and he certainly did not disappoint. This August, around a year after he took to the steps of the Lincoln Memorial to “restore honor,” Glenn Beck will be “restoring courage” in Jerusalem! Hmmm…something tells us The Daily Show won’t be holding a counter rally this time…

For the past few months, Beck has made the plight of Israel into one of the centerpieces of his show, discussing it for at least a few minutes every day. It’d be interesting to know just how long he had this rally in the works. It was at least enough time to get a poster designed and up on GlennBeck.com. The poster is a play off the now iconic image of the Lincoln Memorial used for last year’s rally with Moses replacing Honest Abe. The rally doesn’t seem to have an exact date set yet, but it does appear to be planned for August.

Man, all the critics who thought Beck was being egotistical in speaking where Martin Luther King, Jr. spoke are going to have an absolute field day when they find out he’s going for the birthplace of Jesus Christ!

So, what do you guys think? Are you Beck fans going to be buying tickets to the Middle East? Beck specifically mentioned on his show that crowd expectations will be different this time out but, if the guy can get people to travel around the globe for an event, well, that’ll be a pretty darn impressive way to end his TV show.