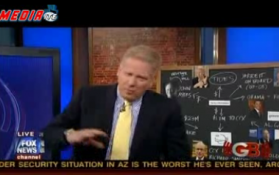 Try not to choke on the irony. Glenn Beck is enraged that people have been comparing the new immigration law in Arizona to Nazi Germany. Yes. Really. He’s mad.

Earlier today on his radio show Beck wanted to know how come it was okay for the left to rage over people making Hitler references but now it’s okay for them to make them.

I thought it was bad to compare things to Nazi Germany…the left said that you shouldn’t use Hitler references and swastikas and compare things to Nazi Germany…I thought it was dangerous. Didn’t Nancy Pelosi say, “And they’re using swastikas and stuff, and that’s bad.” Wasn’t everybody on the hasn’t MSNBC been running nonstop, you know Timothy McVeigh was, you know, is being reincarnated right now?

He got angrier on his show tonight.

Arizona sure is putting the AZ in Nazi. I really hate to rain on the hate parade, but could we slow down for just a second here and ask: You’re out of your mind? Are you comparing the systematic cold-blooded extermination of millions of Jews, to America making sure people are here legally. The parallels are non-existent.

Because, of course, non-existent parallels are a big no-no in Beckland. Ha. Short version of Beck’s argument: this Nazi rhetoric is overblown and offensive, and Arizona is perfectly within it’s right to step in where the federal government fails (Beck is definitely not alone in this line of thinking), and it is perfectly okay to ask illegal immigrants to prove their citizenship (no mention of the civil liberties of actual citizens). Also, he’s more than willing to concede if the law is unconstitutional it should be struck down. In the meantime, the “constitution is not a suicide pact…the states have to take action.” Video below. Side note: the title of this post was the subject line of Beck’s daily email, which is what drew my attention to it.