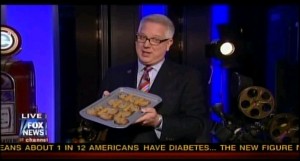 On tonight’s show Glenn Beck critiqued two of the big speeches last night, President Obama’s State of the Union and the Republican’s response from Rep. Paul Ryan (apologies to Michele Bachmann). Once that was done, he gave his own and, yes, it involved the tree that he brutally chopped up last night.

While Beck had been a fan of Obama’s Tucson Memorial speech, he had few kind words to say about the speech from last night. In fact, he compared it to a tray of cookies and fish sticks. You see, the cookies represent the “tasty” small-government ideals espoused yy Ronald Reagan, while fish sticks are the progressive policies of Woodrow Wilson. Fine separate but, when combined — as Beck felt Obama did in his speech — they just don’t work.

(At this point, may I just say that Beck’s prop department is absolutely killing it with the ridiculous visual metaphors. They even built the fake crime-stopping tube from Minority Report earlier this month. I’ll leave it to all of you to debate whether these props are actually helping explain anything but I will say that this stuff sure hasn’t been boring. Prop comics may have had a bad rap since the days of Carrot Top or maybe even since Gallagher, but prop punditry? That’s the wave of the future.)

Anywho, on now to Paul Ryan. This speech? This speech Beck liked (as a chyron promised, a link on GlennBeck.com leads to the full transcript). Quite a bit actually. He was particularly fond of Ryan’s statement about “the importance of limited government and the blessing of self-government.” He asked viewers to see if they could hear the difference between that and what Obama said. Then he changed his mind and asked if they could feel the difference? “Feel” it? Alright. Beck’s officially never allowed to make fun of Chris Matthew’s tingle again.

Beck then launched into a bunch of talk of how Obama should have talked up parents more than teachers and how foolish the President’s green initiatives were since they hadn’t worked since the last time he brought them up (“Star Wars was just a movie. And so was An Inconvenient Truth.”) What this section really accomplished was making me feel really bad for the poor company selling solar powered generators that bought ad space directly after. Oops.

Finally, then, it was time for Beck to give his own State of the Union. Unsurprisingly, his included props; the tree from yesterday to be exact (or one with better rings). Beck explained how the rings grew closer together during times of distress and used this to show how even Mother Nature understands that you don’t spread out and grow when things are rough. Therefore, we shouldn’t do the same with our government.

It was a fine speech, I guess. I don’t know how it compared to Obama’s or Ryan’s words but I’ll say this: compared to yesterday’s episode where Beck danced around with a chainsaw and threatened a bunny, this one felt a little dry.