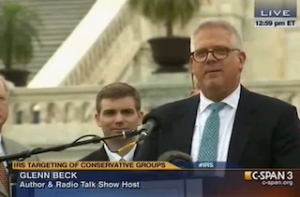 Glenn Beck headlined the Tea Party Patriots’ “Audit the IRS” rally in Washington, D.C. Wednesday, delivering an epic speech that warned his followers that they are losing their basic American rights. He called the government the “chief violator” of those rights and attacked the “mainstream media” for failing to hold those in power accountable.

Beck listed off the “god-given” rights that Americans hold to be “self-evident”: “You have a right not to be executed without trial, not to be held without charge.,not to be searched without warrant, or spied upon without cause.” He said, “the government is no longer the protector of those rights, they are the chief violator of those rights.” As he’s done before, he compared his cause to that of Dr. Martin Luther King, Jr., saying that the abuses the tea party is fighting against are the “exact same abuses” King challenged.

At one point, Beck appeared to challenge House Speaker John Boehner directly, noting how the streets of Washignton, D.C. point directly to his office. “It’s intoxicating. The symbol of our nation make men drunk with power. And then they justify their lust for more by claiming they’re public servants.”

“I realized last night when I came and landed in this city,” Beck said of D.C., “I actually like Vegas more than this city. I realized the only difference between Las Vegas and Washington, D.C. is that at least Vegas has the decency to admit its full of crooks and hookers.”

After saying that both Republicans and Democrats are responsible to driving America down this ominous path, Beck added that “the getaway car was driven by the mainstream media.” Or as he described it, “a media no longer with a straight face can claim the role of journalists.” He told the media, “journalism implies that you print or run stories the powerful do not like. What you are doing is nothing more than public relations.”