Glenn Beck Battles With Artist Over Painting Of Obama In Crucifix Pose: ‘This Is So Dishonest’
video

Glenn Beck Battles With Artist Over Painting Of Obama In Crucifix Pose: ‘This Is So Dishonest’ 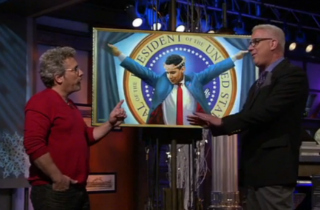 Continuing his run as a newfound political art critic, Glenn Beck debated Michael D’Antuono, the artist behind a controversial painting of what appears to be a crucified President Barack Obama, on his BlazeTV show last night.

Beck made headlines earlier this week when he dropped a figurine of President Obama into a jar of “urine” (yellow food coloring and water) as his reaction to offensive political art like the infamous “Piss Christ” from many years ago. Following up that conversation, Beck brought on liberal artist D’Antuono to discuss his painting that shows Obama wearing a crown of thorns with implied crucifixion.

When challenged by Beck, D’Antuono explained that he did not intend to portray Obama as Jesus Christ, despite the similarities. “I do not think he is Christ. I was not trying to convey that,” the painter told Beck. “Actually, this painting does not convey my own personal opinions. It is more a mirror reflecting the personal opinions and prejudices, preconceived ideas of the viewer. It’s kind of a sociological experiment.”

“I don’t buy that bullcr– come on,” Beck pushed back. “How do you not say this is an image of Christ? He is splitting the veil, you know that right?”

D’Antuono explained, in response, that some interpretations could see the curtains as standing for Obama’s desire for “creating transparency.”

As for the implied crucifixion, given Obama’s arms extended outward, D’Antuono argued that Jesus was not the only person crucified.

“It could be. But I’m not comparing him to Jesus,” D’Antuono replied.

“This is so dishonest,” Beck shot back.

D’Antuono conceded the “religious reference” but added that perhaps the painting shows how Obama is “metaphorically crucified by the Right.”

Beck responded: “Would you think that you would ever paint something of me, that I am crucified by the Left?”

“Well, I haven’t given that any consideration,” the artist answered.

Beck also singled out other D’Antuono paintings, including one that depicts a police officer in a Klu Klux Klan white hood, pointing a gun at a black child, who is wearing a hoodie and holding a bag of skittles. The artist said the painting was inspired by the Trayvon Martin tragedy from earlier this year. Beck said he found the painting “extraordinarily offensive.”

Despite their deep disagreements, however, the interview ended on a positive note with D’Antuono telling Beck that he did not expect him to be so “reasonable.” He joked: “I don’t know how I’m going to go home and tell my family. I expected you to try to tear me apart… I think that’s the reputation you have from the left, but it’s not true.”

Watch the interview below, in two parts, via BlazeTV: