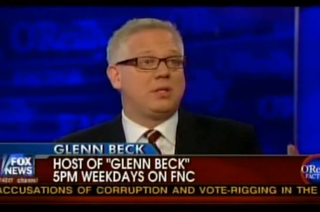 As Glenn Beck‘s latest campaign against Google goes to show, he has little trust in large entities, whether they be government-run or private. After dedicating some time this week to asserting that Google’s involvement in the Egyptian revolts gives them a dangerous bias that seeps into the order of search results on their site, Beck took his campaign, as he always does, to an intrigued Bill O’Reilly last night.

Admitting that he usually has help when using computers (and getting only a deadpan “I’m actually a computer programmer” in return), O’Reilly asked Beck to explain how a search engine with no real editorial content could have a bias, and how he concluded that he should be concerned. Beck explained that it was primarily the fact that two vice presidents of the company were involved in the Egyptian revolts that tipped him off, though later noted ties between Google and, among others, former Beck arch-nemesis Van Jones. He also tied Google to the Obama administration, noting that he believed the State Department wanted the Egyptian revolts to happen and, “when you hear the President say ‘it was youth like you and it’s the new media; it is social networking that brought on the revolution,’ he’s talking about Google.” Beck did not explain– nor did O’Reilly ask– where that leaves actual social networking sites like Facebook and Twitter, rather than search engines.

As for the editorial posture, Beck said it was  all about the way they “order stories” in such a way that only those they prefer to be at the forefront of the population’s attention get the highest rankings. To him, Beck concluded, “I feel the same way [towards Google] I do about Halliburton or Blackwater”– two of the dirtiest names in the left-wing book.  O’Reilly did not respond as skeptically to this theory as he has to many of Beck’s in the past, but as the story develops, the amount of evidence Beck will be able to compile will make the difference.