Glenn Beck Calls For Anthony Weiner’s Resignation: ‘Is There No Shame Left In America?’ 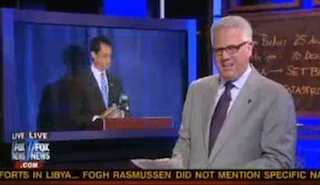 If anyone enjoyed today’s press conference the most, it was…well, probably Andrew Breitbart. But following closely behind, there’s Glenn Beck. Beck was absolutely giddy as he spent the first few minutes of his show railing on the disgraced congressman who had been a huge detractor last year. If anyone thought Beck enjoyed making an anti-Weiner website, you should see him now.

I suppose we shouldn’t be surprised Beck didn’t pull any punches today. Still, he was absolutely brutal. After mentioning that there were now more pictures of the Congressman, Beck asked, “Anthony, have you looked at yourself?” before asking if the country should question Weiner’s judgement simply because he “thinks he’s hot.” Beck then compared Weiner, as many have, to the resigned “Craigslist Congressman” Chris Lee.

But, if you really want to know just how little he thought of Weiner, you need only listen to this:

“You know who Weiner actually makes me have more respect for? [SHOWS PICTURE OF ERIC MASSA] That guy. Remember him? Remember the guy who was like, ‘We used to have tickle fights when we were in the Navy’? ‘Yeah, I just like to go actively hug men.’ That guy at least had the common decency to, when he knew the jig was up he was like, ‘Ok, uh, got me. I resign.’ Today, I have more respect for this man.”

Ouch. In case you don’t remember, Eric Massa is responsible for one of Beck’s most embarrassing televised moments.

While the Fox News host got back to business as usual for the rest of the show, he got in one more dig after the opening credits:

“That was the guy, by the way, Anthony Weiner, who, last year, was holding Congressional hearings calling me ‘unethical.’ How are you? ‘Cause I’m great. The world makes no sense whatsoever.”