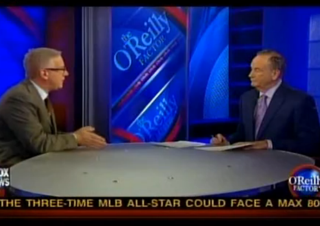 In the immediate aftermath of Osama bin Laden‘s death, Glenn Beck certainly gave having the most ostentatious celebration over it the old college try. But on last night’s O’Reilly Factor, Beck revisited the celebrations and seemed to sing a different tune, expressing unease about a “culture of death” that would celebrate his passing and, in particular, harping on President Obama for not letting “a good crisis go to waste.”

Beck’s newfound unease put him at odds Bill O’Reilly, who saw the President’s visit to New York an appropriate reaction and appreciated “anything that draws attention to the suffering of the 9/11 families” without paying much mind to the “grandstanding or the hobnobbing.” Beck’s skepticism appeared lost on him, as the latter argued President Obama’s visit was “shameless” given his support of the so-called “Ground Zero Mosque” last summer and the release of photos from Abu Ghraib prison. Of the latter, O’Reilly noted that the administration actually stopped the release of more pictures, an act Beck credited the Pentagon with, not the President. But unlike many who question the President’s judgment on the bin Laden issue, Beck did not seem to mind that the President chose not to release the photos of bin Laden’s death. “It’s like the birth certificate thing,” he noted– no one who at this point believes bin Laden is alive will be persuaded by photographic evidence.

As for those who did believe bin Laden was dead and celebrated appropriately, the entire exercise seemed to creep Beck out. “I don’t like the culture of death,” he noted, adding that while he was happy to be patriotic, the celebrations in New York and DC after the death of bin Laden “felt a little wrong to me.” So… about that marching band on his show on Monday, accompanied by ? “When I brought the marching band, it was to make a point”– an existential one. “Are we celebrating death or are we celebrating a job well done?” O’Reilly clarified that, to him, “we were celebrating the triumph of good over evil,” and that a “big evil [went] down the drain.” Beck didn’t seem so sure of the revelers’ good faith.