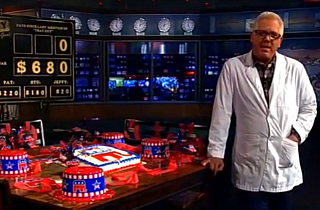 On his BlazeTV show last night, Glenn Beck dressed as a doctor and declared the death of the establishment Republican Party, celebrating with an appropriately-themed cake and footage of actual elephants dying.

With co-host Pat Gray lying on a gurney — a metaphor for the “dead” GOP — Beck explained that “the media is celebrating the fact that the GOP is on its death bed and the president did some excessive GOP-is-dead celebrating at the inauguration as well, ignoring the 60 million Americans who voted against him.”

But Beck isn’t angry with the president (wait, did he just break his own moratorium on mentioning “that guy”?) over such celebration, because “we’re celebrating the death of the establishment GOP right along with them.”

Before showing off the “Death of the GOP” cake on the table behind him, Beck said that he is glad the establishment wing is dead because “they are refusing to confront the cancer within the party… progressive-lite Republicans who care about winning really more than anything else. They cave to political correctness rather than sticking to principles.”

The conservative host explained that the only difference between the Republicans and the Democrats is “the speed” at which they take us towards an impending fiscal crisis. He then tore into the “establishment Republicans” for wanting to give citizenship to “illegals.”

Playing file footage of actual elephants dying (“really, really sad,” as he described it), Beck bid adieu to the GOP elephant, explaining that he isn’t sad at all over such a loss.

Beck went on to criticize Obama for “blaming Fox News and Rush Limbaugh” for partisan gridlock, saying that it’s a good thing Fox and conservative radio personalities are able to prevent the establishment Republicans from going along with “progressive weasels.”

“While the elephant my be dying,” he concluded, “what isn’t dying is personal responsibility. How do I know? You can trust me. I’m a doctor.”