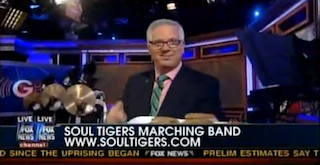 Today, Glenn Beck began his show solemnly. While he praised the military’s actions in capturing and killing Osama bin Laden, he was greatly disturbed by the celebrations he saw last night. He asked whether Americans cheering the death of this man was any different than people in the Middle East cheering on 9/11. And then he gave this a little thought, eventually deciding, “If you can’t beat ’em, join ’em!” Within seconds, the set was filled with a marching band and refreshments.

Yes, I’ve never regretted having to write a headline more than with this post. I’d have loved to have just called this post “Beck Admonishes Americans For Crude Celebrations” and allow you to discover the joke itself, that just seems like asking for trouble. Besides, it’s never fun to be accused of misunderstanding something…

Anyway, after that raucous opening, Beck continued in high spirits. He brought up the debate of whether or not to show the pictures of Bin Laden’s body which are apparently quite gruesome. Quoting ABC News’ report that “brains and blood” are visible, Beck pointed out that he’d wanted to see the guy look like that for 10 years. Beck then played a clip of a modern video game, arguing that most Americans could probably handle it.

This morning on his radio show, Beck had complained about the burial at sea that Bin Laden had gotten, offering up some creative alternatives for the terrorists’ final resting place. He had a new one this afternoon, recommending that Bin Laden was sewn up in a football and buried under the 50 yard line at the New Meadowlands Stadium so that he would spend eternity “in New Jersey.” (Normally I’d be prepared to send my own Special Forces task force after someone who dissed the great state of New Jersey like that but, I’ll admit, that was a pretty funny line)

However, Beck didn’t stay jovial the whole show. Towards the end of his opening monologue, Beck began listing all of the attacks Al Queda has perpetrated and the names of the Americans that have died, reminding the audience why a small gesture like a marching band feels so good right now.

You’re probably wondering how I can call a whole marching band a “small gesture.” Well, that’s just in comparison to what came towards the end of the episode. Beck looked into the camera, thanked the President, and plugged the red phone back in. Yes, he promised it was for one day only, but still. It was clearly a day of celebration on Glenn Beck this afternoon.