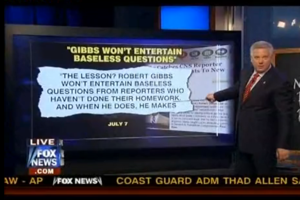 During yesterday’s White House press briefing, Press Secretary Robert Gibbs and CNS reporter Frank Lucas had a testy exchange over comments by new recess appointment, Centers for Medicare and Medicaid Services head Donald Berwick— an exchange with Glenn Beck saw as exemplary of the type of “you attack, you marginalize, you mock” strategy Gibbs, in his eyes, has perfected. Beck took Gibbs to task for dodging the question, and had a few words for some of us in the media, too.

Most of Beck’s disapproval this time around is for Gibbs. Berwick, despite his position at the center of the story, seems to be to Beck an almost dispensible figure in the long line of questionable Obama administration appointments– “another Van Jones.” Gibbs, however, was effectively dodging, ridiculing, and bullfighting the media out of honing in on Berwick’s “solid anti-capitalist ideology.” Beck mocks Gibbs’ “secret comment book” remark– “there’s this thing called the television”– and argues that “the fact that Congressman Ryan said something similar doesn’t make it ok.” Lucas had answered in the affirmative when Gibbs asked him whether a quote by Rep. Paul Ryan was by Berwick.

To prove that Gibbs’ tactic was working and the media was not focusing on the Berwick story, Beck cited this quote from our article on the exchange with Lucas:

“The lesson? Robert Gibbs won’t entertain baseless questions from reporters who haven’t done their homework. And when he does, he makes enough of an example out of them to keep the rest of the Press Corps on their toes.”

Beck argues that this is symptomatic of the entire media’s aversion to taking “the ever-glib Gibbs” to task for deflecting questions, and, given that Berwick did make questionable comments about redistribution of wealth, calling Lucas’ question “baseless” and saying Lucas hadn’t done his homework was not entirely fair.

Now to the heart of the matter. He has a fair point inasmuch as Lucas’ first question was about comments that were well-documented. But honest mistake or not, indicating that a quote by one person is actually by another– in the kind of rapid-fire political battle that Lucas initiated with Gibbs? It’s an instant game-over. It shows that, at the very least, Lucas hadn’t thought critically enough about Berwick’s quote not to confuse it with something a Republican congressman had said.

This, of course, is an entirely separate issue from the appropriateness of Berwick’s beliefs, which Beck perceives as without a doubt lacking, and whether Gibbs is a “smug, condescending jerk” (which, to his credit, Beck notes is a title many have handed to him during his time in the limelight). We’ll leave both of those conclusions up to you.