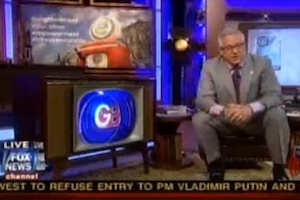 To start off his MLK Day episode today, Glenn Beck read disturbing news quotes from the sixties, all of which tried to blame Dr. Martin Luther King, Jr. of violence. Beck then made the connection to how the media treats he and the Tea Party, quick to make accusations just because it fit “the narrative.” As an example, Beck used ABC News’ handling of the alleged death threat that happened at a taped town hall last Saturday. But Beck hurt his argument when he earnestly accused ABC of “half-truths” for reporting in a manner that any responsible news outlet would, then gets his own retelling of the facts of the case wrong, perfectly illustrating the problem with “absolutes.”

Beck’s biggest beef with ABC (besides the continued employment of Christiane Amanpour) was that they had reported that Eric Fuller had “appeared” to make a death threat instead of simply saying he did. Beck said:

“He ‘appeared’ to make a threat? ABC, let me tell you something. I mean, it’s sad how little you value your credibility. But, in the end and by your choice, it will be what puts you out of business and everybody else. If you and the others continue to peddle half-truths and out and out lies, people won’t watch and listen and trust.”

While ABC News could have said Fuller made a death threat, saying he “appeared” does not make it a “half-truth” as Beck claimed. Instead, it’s using journalistic discretion, a small but significant distinction. Fuller has not been convicted of making a death threat and it is not the job of a news outlet to do that. It’s the same reason our headline reads “Alleged Death Threat” even on a post with video evidence. Beck is certainly entitled to, and maybe even justified in, making claims about bias here. But Beck went for an absolute here, and, in so doing made his own errors stand out. Take for example, an error he made, ironically, just seconds earlier.

Just before he proudly admonished ABC for “hurting their credibility,” Beck seemed to actually get his own reporting of the story wrong. Twice he said that Fuller had held up a picture of Tucson Tea Party co-chair Trent Humphries while saying “You’re dead” when all news outlets (as far as I’m aware) have reported that Fuller merely took a picture. Obviously there’s not a huge difference in this retelling, and they’re certainly both threatening actions (though Beck’s is arguably more so because it implies pre-meditation.) However, when one is doing a segment attacking the credibility of another media outlet, one should be absolutely certain that you get your own facts straight. Again, this is not an apples to oranges comparison, but rather an illustration of the problem with absolutes, and the need for journalistic discretion.

Doing a segment on alleged bias and reporting on a narrative seems in hindsight to have missed the target. The better question may have been to ask where was the media’s journalistic discretion last week ago when so many were ostensibly linking the Arizona shooter tragedy to Sarah Palin.

Instead, Beck overreached and tried to paint ABC News as liars and, in the end, succeeded in mostly just shooting himself in the foot.