Glenn Beck Claims Push For Global Governance Is “Out In The Open,” “Not A Conspiracy” 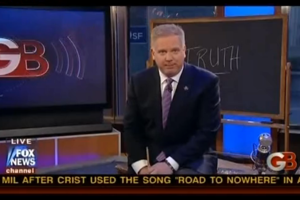 Glenn Beck is starting to notice a pattern in a series of public statements made by individuals in the Obama administration– the repeated “push for global governance,” as seen in Navy advertisements and speeches by President Barack Obama, former SEIU president Andy Stern, Al Gore, Hillary Clinton, and “a lot of people who want to take us down this track.”

Beck began with some comments from President Obama’s speech at West Point last weekend, where he spoke about the international community. Beck noted that the cadets were “not very receptive to it,” but that, apparently, the Navy was, given a recent advertisement for the Navy that described it as an “international force of good.” He then played several clips of the aforementioned, and dug up President Obama’s campaign speech in Berlin, where he described himself as a “citizen of the world.” “There is no such thing as citizens of the world,” Beck countered, “we are Americans,” and later, explained where the phrase came from:

Since when are there citizens of the world, or workers of the world… except for the communist slogan? These are all in their own words. It’s out there in the open. There’s no conspiracy, none. It’s not just Americans, and it’s not just Democrats, it’s Republicans, as well. It’s a lot of people– I don’t think you– but it’s a lot of people who want to take us down this track, and they’re going to push us into it.

The clip from today’s Glenn Beck below: