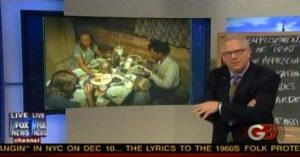 Yesterday, I wrote about what I feel is Glenn Beck’s biggest skill as a television host: his uncanny ability for congratulating his audience for sharing his information. Today, it seemed like he was focusing on congratulating his older viewers in particular (maybe he saw The Simpsons this week). While going through the many components leading up to the “perfect storm” of progressive social revolution Beck has been warning against, he put much of the blame on the kids these days like that silly atheism fad that’s sweeping our nation’s youngsters. He also compared the tough and tumble poor people of the Depression-era to the totally wussy poor people of today. Did you know poor people now have big screen TVs? Wimps.

Beck showed a picture of a family from the Great Depression (In color! We want to harken back to the old days, but not that far back!) and compared it to a radio show recording of Detroit welfare recipients eagerly asking for “Obama cash” from last year. He then put the Depression picture back up asking, “Do you think these people would have lined up for cash and they didn’t care? I don’t think so.”

I don’t think so either. The Depression-era impoverished would never have accepted hand outs from the government. They didn’t want some deal cooked up by the government. You know, some newer social program giving them money they didn’t deserve. A “new deal” if you will. God, young people suck.

Or should I say, “Godless, young people suck.”