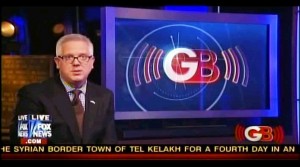 You’ve probably heard at this point that Glenn Beck is on a bit of an Israel kick. That’s involved spending as much time as possible explaining to his viewers why they should care about the plight of our friends in the Middle East. One of the main ways he’s done that is by comparing the much touted “Arab Spring” occurring in the region to the rise of Adolf Hitler in the 1930s. Of course, if the governments springing up in countries like Egypt are the Nazis, what does that make people like our President who is giving a speech supporting the “Spring” tomorrow morning? Well, Beck made his former insinuations clear by comparing President Obama and the Left to American Nazi appeasers of the last century.

While Beck never says the dirty word “appease” during his nearly episode-length example of Godwin’s Law, he used a New York Times article from 1933 as his comparison. The article, about Hitler’s autobiography, mentioned the rampant anti-semitism in Germany but seems to make pains to point out all of the good things National Socialism seemed to be doing for the depressed Germany post-World War I. Beck wanted us to know if this sounded similar to anything.

“Let me ask you, if I asked the President or most people in this administration or Congress today on the Left what they see happening in Egypt, wouldn’t they say, ‘What’s happening in Egypt is great. Have you seen all the people? Okay, the Jew thing is bad, but have you seen all the happy people?’ That’s exactly what they’d say. It’s the same thing. Some of the happy people, you’ll remember, were raping Lara Logan from CBS News while screaming, ‘Jew! Jew! Jew!’ in that square on that day. Could we get any more comparisons? And do I need to explain any more why it is time to restore courage and take a stand? Enough is enough but, I’m telling you, the hatred of old will come back again. And are we going to repeat the same pattern because the world knew it. The Germans knew it. The world knew it. But they chose to ignore it.”

Then Beck went after the President and the First Lady saying they knew how our country got on this path. “The more this President does,” Beck said. “The more he looks like The New York Times of 1933 or, worse yet, Neville Chamberlain.”