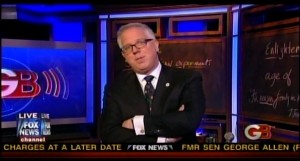 As we reported earlier, CUNY professor Frances Fox Piven claimed to have received death threats. Given that Glenn Beck frequently complains that Piven is the one inciting violence and calling for revolution, Piven blamed the threats on her as a result of Beck’s rhetoric. If all this finger-pointing left you confused, the New York Times arrived on the scene in an attempt to make sense of it all, except that their take on the story served only to pour gasoline on the fire.

On his radio show today, Beck and his crew read parts of the article in humorously ominous voices, as they mocked what they perceived to be elements of poor journalism. Then Beck’s tone became more serious as he argued the power of the Times is being diminished with a story which he considered to be “such a hatchet job.” Beck was most angered by the fact that the Times quoted from the Center for Constitutional Rights, an organization with ties to and funding from Beck’s arch-nemesis George Soros, yet failed to disclose the Soros connection.

The Center for Constitutional Rights alleged about Beck “there comes a point when constant intentional repetition of provocative, incendiary, emotional misinformation and falsehoods about a person can put that person in actual physical danger of a violent response.” Beck thought this was horribly ironic given that printing that very quote was dangerous misinformation about him.

Absent clear evidence that Beck specifically demands viewers take violent action against someone, then any claim or insinuation that Beck incites violence is utterly baseless, especially when the threats of violence come from “anonymous commenters” on Beck’s website, but even if Piven’s death threats came from loyal Beck viewers. Criticizing someone for whatever reason or exposing any facts about them cannot in any way be interpreted as asking someone to kill the subject of your criticism. Even more significant though, this back and forth is getting tediously boring and predictable. Not just the claims against Beck, but his repeated attempts to defend himself too.

If anything, Beck needs to learn a little from master media agitator Rush Limbaugh. When recklessly and falsely criticized about something, don’t respond seriously, just respond with something that will enrage critics even more and quickly move along to the next topic. Otherwise accusations of Beck inciting violence might be false, but they are a smart and effective way of distracting Beck away from discussing the real problems facing the country and instead just talking about himself.

Listen to the clip below from The Glenn Beck Radio Program:

Glenn Beck Continued On His Fox News Program Below: