Glenn Beck Found Ed Shultz’s Apology ‘Sincere’; He Should Not Be Taken Off Air 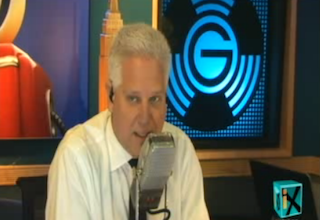 Two days ago, Ed Schultz called Laura Ingraham a “right-wing slut” on his radio show. MSNBC reacted quickly, suspending him for a week. While many are probably thrilled with this outcome, one person who isn’t is…Glenn Beck. Surprised? You probably shouldn’t be.

While Beck says he considers Ingraham a friend, he has made it clear in the past that he doesn’t think anyone should be silenced. Both as a believer in the freedom of speech (and as a frequent target of boycotts himself), Beck has said multiple times that he doesn’t believe in boycotts or petitions to get people off the air. While we have felt that some of his non-boycott calls hued pretty close to the real deal in the past, this is not a new stance for the Fox News host.

What might be surprising is the amount of empathy Beck displayed for Schultz. After playing audio from Schultz’s on-air apology, Beck contrasted Schultz’s comments to “fake” apologies from Keith Olbermann and repeatedly stated that he felt Schultz was being sincere even though he doubts Ingraham needed the reassurance (from her statements, this seems accurate). What sold it for Beck? Schultz’ mention of embarrassing his wife.

“I know with me that when I get home and I’ve said something stupid, my wife will say, what the hell were you thinking? What were you thinking? What is wrong with you? And I think every guy can relate to saying something and your wife giving you the lecture of your life when you get home. That’s what a spouse is for in many ways, to keep you anchored and keep pulling you back. That’s why I think he’s sincere. I think he was in the firefight and just said something and his wife handed him his head when he got home and he realized ‘That was really, really stupid of me.’ We all make mistakes.”

Beck seemed so level-headed that his co-hosts mocked him by playing sitar music, the clear indicator of a hippie pacifist, in the background. But, before you start thinking Beck has gone soft, he made it very apparent that he is no fan of Mr. Schultz. He asked what made the “slut” comment so different from any of the other “really vile things” he’s said. And he pointed out that one of the reasons he wanted Schultz still on the air is to be the supposedly disreputable face of progressives.

Still, it’s interesting how Schultz one moment of inappropriate anger has led to a surprising amount of civility and maturity from himself, Ingraham, and a number of spectators.

Watch the clip from Beck’s show below: