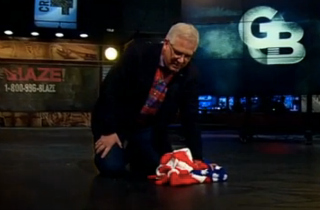 Glenn Beck‘s BlazeTV show last night took a turn for the melodramatic. After the conservative host lamented that “collectivism” is taking over the United States and America needs saving, he ended up on the floor with an American flag, providing medical aid to a imaginary, dying “Lady Liberty.”

Beck spent several minutes tearing into Colorado legislators for their “insults” against rape victims. The most recent example he cited was State Sen. Evie Hudak (D) telling a rape victim who is opposed to stricter gun control that “statistics are not on your side, even if you had a gun.” Beck also brought up State Rep. Joe Salazar‘s (D) recent suggestion that rape whistles and campus call boxes are a more effective tool for women to use than brandishing a weapon in the event of rape.

“The collective mentality is taking over,” Beck determined. “Forget the individual; what’s best for the collective? That’s the problem,” he said, before transitioning into a monologue about how the “bright light” of collectivism is actually a flame, and America is headed towards its death.

“America is hemorrhaging. And some of us have seen the hemorrhaging,” he said before kneeling down to the floor. “And we grab a coat or a blanket and we’re down on, and we’re on the ground, and what do you do? Every time you push something onto the wound to stop the bleeding,” he said as he mimicked applying pressure to a bloody wound with the help of an American flag.

“[America] is down on the ground right now, she’s gurgling, we’ve got our hand on the wound,” he said, likening the imaginary scene to a typical Hollywood death scene, in which the rescuer pleads with the victim: “Stay with me. Talk to me. Don’t close your eyes; don’t go to sleep. Wake up! Stay with me!”

“When it gets to that part of the movie, that person usually dies,” he said as he rose from the floor. “Their eyes are rolling in the back of their heads. In our case, Lady Liberty in critical condition. But it doesn’t have to end that way.”

He then pleaded with his audience to take their children out of public school “indoctrination camps” because they are only being taught that “the collective is greater than the individual.”

As a recovering alcoholic, Beck suggested he has a unique perspective on the situation: “The last time I was on the floor, I think God had his jacket on my chest as I was hemorrhaging to death, and he said, ‘Stay with me. Stay with me.’ And so I look at things differently because I’ve been down on the floor before.”

Ultimately, Beck concluded, that lack of faith is liberating because it allows him to put more faith in God.

Watch below via TheBlaze: