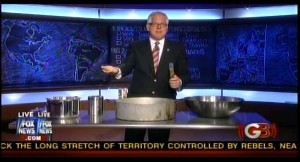 Glenn Beck is back from vacation and it seemed like he was eager to make up for lost time as he squeezed many of his concerns all into his first segment. Plus he even had time for a scientific experiment with M&M’s to demonstrate the potential nuclear meltdown in Japan. However, Beck made the argument that the danger from a nuclear meltdown pales in comparison to the horrible consequences from a crashing bond market and isn’t even as a scary as the threat from billionaire George Soros.

Beck didn’t get into too much detail with the physics behind nuclear energy as he even admitted, “I’m the guy with the M&M’s.” Yet his point was to suggest that there are still many safety containment measures in place that makes a meltdown much less likely than the massive amount of media coverage might suggest. And even if it did occur, Beck says the plant cannot explode and it cannot turn into a nuclear bomb. Instead, only people within a 12 mile radius, about 210,000 would die, which would be a legitimate nightmare except for the fact that Beck discloses most in the area have already been evacuated.

Beck accuses the “lazy media” of being fascinated with the nuclear meltdown story because it is “sexy television.” Instead the real danger to the world, Beck argues, is a crashing bond market and a collapsing value to the dollar which would result in deadly harm to millions, and not just hundreds of thousands. Beck wonders, “how many people will die of starvation” when the bond market melts down?

Finally, to bring Soros into the mix, Beck declared that the “radical left is already busy at work” to make sure that “this crisis just doesn’t go to waste.” Beck cites multiple articles coming from various institutions funded by Soros that are already using the crisis as an opportunity to advance their own political purposes and lobby against nuclear energy.

With Beck back, he unleashed a whirlwind of issues that he deemed to be most urgent in the wake of Japan’s crisis. As Beck continues to wonder why he is described as “apocalyptic,” proclamations that millions might be dying from starvation soon might begin to offer up a clue? Regardless, it’s good to see Beck making time for at least some fun with M&M’s.