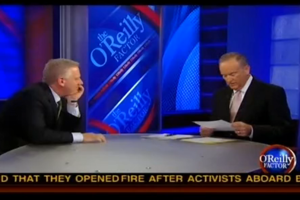 Did you know Bill O’Reilly used to be a high school teacher? Well, he was, but that doesn’t mean he could tell Glenn Beck about what a “racist monster” Woodrow Wilson was. In an O’Reilly Factor segment about leftist indoctrination in schools, Beck railed about the atrocities of the Wilson administration and how they had been wiped from the history books, only to receive an apathetic “That may be annoying, but its not vital to the country,” from the host in response.

Part of what makes the Beck/O’Reilly dynamic work is that O’Reilly is one of the few people that is comfortable shooting down Beck’s sometimes confusing causes in real time, to his face. The matter at hand– Los Angeles schools teaching students that the Arizona immigration law is unamerican– was one of high concern for O’Reilly, taking up all of his “Talking Points” segment and almost half his show. While Beck agreed that “teaching our children now that what is happening in Arizona… is somehow or another akin to slavery” was “awful,” he found the lack on information on the Woodrow Wilson presidency equally, of not more egregious.

“The guy was a racist monster!” he told O’Reilly, while explaining that Wilson was behind the Jim Crow laws and resegregated the military. “He was a very internationalist thinker,” was O’Reilly’s lukewarm reply, in a tone that implied a silent “I guess” following it. He also admitted he hadn’t know about Wilson’s ideas about race. “If you don’t know this, Bill,” asked Beck, noting that O’Reilly is a “history guy” (O’Reilly explains he is a former teacher), “what chance does anybody have in America to learn it in school?”

True, replied O’Reilly, but “relax for a minute”– aren’t there more important things to worry about? “I’m trying to pull you back into 2010,” he joked as Beck continued his attack on Wilson, “he’s dead. He’s dead. He’s gone.”

There’s also a great quip at the end of the segment, with Beck arguing that “there’s nothing wrong with a man crying,” only to have O’Reilly respond: “and you’ve demonstrated that time and time again.”

Video from last night’s Factor below: