Glenn Beck Hits Back At Claims He’s A “Lunatic,” But Does He Have Any Solutions? 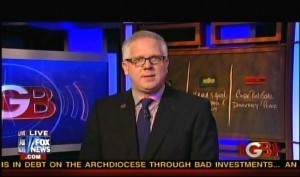 One of the most frequently used short-hand criticisms of Glenn Beck is that he’s nothing but a crazy conspiracy theorist scaring his viewers needlessly. This criticism heated up considerably in the past week as Beck made connections between the uprising in Egypt, the Muslim Brotherhood, and his usual enemies of Marxists attempting to create a One World Order. An article on Gawker entitled “The Right-Wing Nut’s Guide to Egypt” used him as a poster boy. Reason’s Michael Moynihan called that episode “the dumbest thing ever broadcast on (non-cable access) television.” On Beck’s own network, The Daily Beasts’ Michelle Goldberg described his notions as “lunatic theories” on Fox & Friends. Beck played that clip on today’s show, chuckled and promised viewers they’d “feel bad” for Goldberg by the end of the show. But, if he really wanted to hit back at these accusations, Beck should stop trying to prove his theories and start offering solutions.

The other day, I half-jokingly paraphrased Beck’s positions on Hosni Mubarak and his opposition as “Why back anyone? They all stink.” It’s just this kind of attitude that throws further flames on his critics’ fires. When you only talk about the tons of “shadow parties” that are trying to take down our way of life, but don’t offer any way to stop them, anyone would begin to sound like a conspiracy theorist. Anyone. He’s spent plenty of time trying to prove his theories (the dozens of chalkboards on stage this week prove that), but he hasn’t given any concrete ways to solve the situation in Egypt in a way that won’t lead to the “Coming Insurrection.” And, no, neither “The Four E’s” or “fixing Reason firmly in her seat” qualify as “concrete.”

Normally, we wouldn’t think Beck was obligated to do anything other than point out faults and problems. After all, this is his show, he can do with it what he wants. However, Beck promised something different a day short of one month ago.

On his first show of the new year, Beck gave his New Year’s Address, a speech which I described as having something for everyone: “heroic and inspiring talk for the Restoring Honor crowd and pseudo-cult leader talk for the Restoring Sanity crowd.” The biggest moment of the speech (not counting the big reveal of those aforementioned E’s) was where Beck unplugged the red phone which was his line of contact for when the White House wanted to reach him. That phone was so he could give them suggestions on how to save the country. He was sick of waiting for the call though, he explained at the time. No, now it was time for him to lead.

“I will no longer look to others for leadership or answers. We’re out of time. I will lead, me and my family. And I will teach my family and myself to be independent, honorable, educated, self-reliant, and charitable. And with firm reliance on the protection of Divine Providence, I choose to re-found this amazing nation by rediscovering it within myself and sharing it within the circle of my own influence, the principles and ethics that defined American exceptionalism.”

Big words and ones that I’m sure garnered applause in the living rooms of not a small amount of Beck Faithfuls. But, since he was no longer waiting to give President Obama solutions, why hasn’t he started giving them to us?

This Egypt situation is the perfect example of that problem. So, Glenn, you’ve told us that the Muslim Brotherhood is going to take over if Mubarak steps down. You’ve said that Mubarak is a bad guy and we never should have allied with him. Well . . . we did. That’s done. So what should America do? What should Obama do that would make you happy? I don’t have any answers but, a month ago, you promised you would. It was a courageous thing to do (and something that made for great television), but now you have to live up to it.

While making fun of his critics today, Beck said he no longer cared. He quoted Davy Crockett, saying they they could go to Hell while he goes to Texas. Clearly, though, you do care. (That’s not a knock. Who wouldn’t?).

Watch the opening segment of today’s show where Beck discusses his critics in this clip from Fox News below: