Beck: Howard Dean’s Comments On Fox News And The Tea Party ‘Indicate Some Sort Of Dementia’ 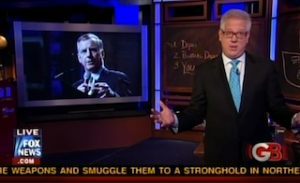 For all the breathless media hoopla and rumors around a possible rift between Glenn Beck and Fox News, you have to admit that he’s one of his network’s most ardent supporters on air. While he wasn’t the first to defend Fox News against Howard Dean’s comments from last week, he did give it a whole segment of his show today. It didn’t hurt that Dean dissed the Tea Party in addition to Fox News, something that Beck claimed indicated the former presidential nominee may be suffering from “dementia.”

First, Beck took on Dean’s accusations that Fox News was a “right-wing propaganda organization”…Well, actually, not so much. What he did do was focus on Dean’s claims that the media blew his infamous “scream” way out of proportion and that media outlets like Fox News repackaged it and used it to take him down. Beck responded to this by…airing the scream clip on Fox News to take Dean down. Not exactly the best argument tactic.

Beck did better on the Tea Party claims. After showing Dean’s comments that the Right of today is the same as the Left of yesterday (ie. people like the Weather Underground). Since Beck already had folks like Bill Ayers up on his chalkboard, he had no problem showing the difference between creating bombs and just hanging out in parks and wearing old timey hats.

Beck then segued right into his discussion of how Ayers and friends are planning a pro-Palestine event in May which is the same time as a bunch of other “evil” happenings all around the world and there has to be a connection and that these are all part of a pre-ordained plan to…hey, wait a minute. Shouldn’t Beck know better than to accuse someone of “dementia” on TV?