Glenn Beck: If You’re Going To Do News, The Only Place In The World To Do It Is Fox 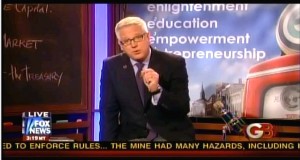 Today on Glenn Beck, Beck detailed the findings in a Pentagon report by financial analyst Kevin D. Freeman and released to the public recently. While Beck wasn’t sure whether or not we should believe its implications that the 2008 financial meltdown could have been brought about purposefully by terrorists or hostile nations, he did feel it was important to look into. Beck then did a bit of media criticism, taking the news outlets to task for not picking up on the story while, instead, focusing on inconsequential nonsense. This led to his summation, a quote about (and of the caliber of) Mr. Charlie Sheen.

He pointed out that only a couple of outlets wrote about the Pentagon report, namely The Washington Times and Fox News (he left a few off the list including Salon and Business Insider but, considering they called it “absurd” and “good for a lolz” respectively, that’s probably for the best). Using that as a jumping off point, he mentioned his experience at a “cable channel no one was watching” and said that, at the time, he was considering quitting television before he got his chance to join Fox News. Beck explained, “If you’re going to do news or commentary, the only place, I think in the world, the only place that really makes an impact, is Fox.” Then he went after all the rest:

You have to figure it out. You have to do the work because I don’t think anybody else will. Because, the rest of the media? They’re just too concerned with the latest Tweet from Charlie Sheen. You’ve gotta start paying attention to things that matter or it’s not going to be Charlie Sheen saying, ‘Boom, winning.’ It could just be ‘Boom.'”