Glenn Beck: I’m Better Than Jon Stewart Because I Talk Longer And Have Fewer Writers 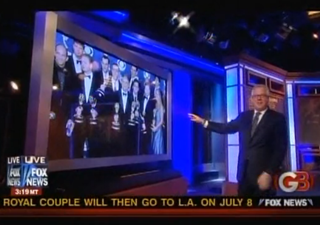 While treated with most eyes as a completely serious political commentator, Glenn Beck has spent a good deal of his career trying to explain to those who don’t get it that he is, for the most part, a sort of right-wing Jon Stewart. Taking that analogy to its logical (?) conclusion, Beck spent a segment on his final show today analyzing the statistics he believes prove his staff to be superior to that of his “competitor”: he talks for twice as long, with less than half the number of writers.

For a show that, for most of its tenure, featured hour-long sessions of its host speaking alone to an enraptured (according to the ratings) audience, it made sense for Beck to dedicate a significant portion of his program to the monologue. It was a staple, he noted, that he always wanted to have in his shows, even when he was still at Headline News. “I’ll never forget when I first went on the other network…” he narrated, “they told me, ‘you can’t talk for more than 45 seconds.'” The fear, he explained, was that people were too “stupid” to listen for more than that. “I think we got up to 6-7 minutes at that other network,” he beamed, though he was happy to report this was nowhere near the peak of segment time in which he would indulge in monologues at Fox. He noted nostalgically that his first monologue at Fox was 7.5 minutes long, and his longest during these final shows hovered around 21 minutes.

Beck appeared to not believe those statistics alone meant anything in a vacuum, so he compared himself to his “competitor,” Jon Stewart. Stewart’s monologues are six minutes long, he noted, with a total of 22 minutes of speaking a night. “Our average, without guests, is 42 minutes.” What’s more, Beck continued to compare the amount of people it took to get Stewart to put together a 22 minute show four days a week– “he’s got 15 writers for his segment.” For comparison, Beck put all of his own writers on the air for the first time, all two of them. “It’s easy to speak from the heart,” he concluded. “It’s easy to do things when you believe in them.”

For the casual Beck fan, the comparison between his content and Stewart’s, which makes it seem that they are of the same nature to the degree that comparing the number of writers on both shows is valid, sounds preposterous. For even the most loyal viewer it may seem difficult to compare the two. But looking back at Beck’s most memorable moments— in all their frog-boiling, cake-eating, czar-hating absurdist comedy genius– classifying this show with one known for strong political statements, giant political rallies and brilliant absurdist comedy, it’s far more on the mark than a first impression would give the impression of. Beck calling Stewart a competitor makes at least as much sense as Stewart putting together a political rally in the nation’s capital, and insisting on not being called a political commentator.

The segment from Beck’s last show via Fox News below: