Glenn Beck Imagines Himself King Of America; Pledges To Nuke All Who Mess with US 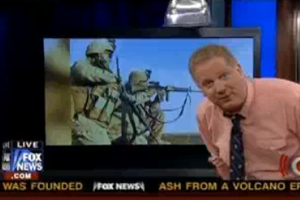 Today’s Glenn Beck Program was all about the troops– namely, the reason America is doing so poorly in Afghanistan has nothing to do with them. It has to do with the “politicians and their grimy little fingers on everything,” so, today, Glenn Beck performed a thought experiment where those politicians don’t exist, and he is King of America. Surprise: King Beck would be “the opposite of what Obama is.”

Beginning the segment by arguing in favor of our troops in Afghanistan– “you’re telling me these guys cant kick the ass of the people in the caves?”– Beck accuses the Obama administration of diplomatic promiscuity, arguing that the reason so many foreign leaders hate the United States is that “we don’t stand for anything.” The first step to standing for something, he proposes, is to refuse to ally with a foreign power simply because we have a common enemy– “I’m not going to get into bed with you because the other guy is worse.”

To fix the current diplomatic situation, Beck put together a comprehensive foreign policy he presented on his chalkboard– the policy he would put into motion “if I were king.” Among the most important rules of King Beck’s foreign policy? “Mind our own business,” but if you mess with America, “”we will wipe you off the face of the planet.” He suggested he is not beyond using nuclear weapons to keep America’s enemies from attacking.

Note the repeated use of the word “king” to describe the position he would be holding should he have the power to implement foreign policy. Putting together such a diplomatic plan– one that sounds highly appealing to neo-conservatives and libertarians alike– like like composing a campaign platform, and lest you should begin to wonder whether today’s new page in the chalkboard manifesto will end up as a tab under “Issues” on GlennBeckForPresident.com, Beck is keeping the terminology as far away from a realistic presidential campaign as he can, at least for now.