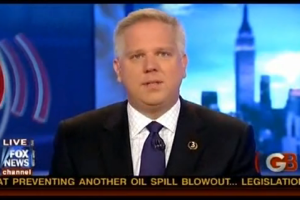 Glenn Beck doesn’t want to live in a world with contracts– that was his message on his TV show today, discussing the decline of human character in America to the point where the victim of a scam is blamed for not having the foresight to sign a contract. Giving an example of how business should be, Beck told a personal anecdote: upon signing with Fox News, FNC president Roger Ailes told him he’d “never need a contract with me.”

Beck railed against the hypocrisy of modern society– a place where “there are no perfect people, and so we force them to pretend they’re perfect.” A place, in sum, where contracts are required because there aren’t enough negative consequences to stop people from breaking their word. “The content of character doesn’t matter,” he explained, when it is the person who is betrayed that is blamed for their betrayal if they are not legally savvy enough to have a “thousand-page contract.”

To highlight an example of business as it should be, Beck turned to his own relationship with Fox News. Not having had a chance to talk to Ailes before signing the contract, Beck was hesitant, and Ailes noticed and asked him why, and Beck relays that the following conversation happened:

“‘It’s never been about money. I haven’t had a chance to really sit down and talk to you. I need to be able to look a man in the eye and know that he understands my business and I understand his. And that we’re not going to hurt each other, and if we start hurting each other, it doesn’t matter what the paper says. I need to look a man in the eye and shake hands on it.’ He looked at me for probably 30 seconds– it was probably a very uncomfortable time for everybody in the room– and he just looked at me in the eye. He leaned in and he shook my hand and said ‘Sir, you will never need a contract with me,’ and I said, ‘Nor with me, sir.'”

So if Beck and Ailes don’t need a contract, does that mean no written contract exists? Given the nature of business in the 21st century, it seems highly unlikely that there is no written agreement between Beck and Fox News. On the other hand, why spend an entire segment talking about the destructive qualities of written contracts to conclude with an anecdote about a time he signed a contract?

Video from tonight’s Glenn Beck below: