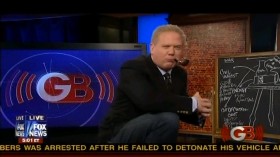 Presumably it was just a matter of time before someone linked the Arizona Law to the Times Sq. Bomber — they represent the two hottest button topics in the nation at the moment. A stretch? Not for Glenn Beck and his pipe. Beck responded tonight to Mayor Bloomberg’s (totally irresponsible) speculation that the Times Sq. bomber could be someone “who’s homegrown, maybe a mentally deranged person, or somebody with a political agenda, that doesn’t like the health care bill or something.”

That’s darn fine detective work, Mayor [enter pipe]. Could be anything, you’re right. Could be a deranged tea party goer. Somebody against Obama and his health care bill. Elementary my dear Watson! You should be our next Attorney General! You are brilliant, sir!

It comes across better in the video. Meanwhile, Beck wants to know “who didn’t know this guy, who he was, what he was doing?” According to Beck everyone including the guy at the hot dog stand knew…knew that he was not a Tea Partier? Beck won’t say specifically but this seems to be the inference. “Everyone in their job, did their job, did it the way it was supposed to be done…not in a racist way.” Which presumably is Beck’s way of justifying the AZ immigration law? The NYPD tracked down the guy who tried to blow up Times Sq. so it follows that the AZ police will not racially profile? It’s a dubious stretch, to say the very least, but apparently one Beck is willing to make. Also, we were able to catch this guy because he immigrated here legally. Also? This guy was clearly motivated by something larger that mere opposition to Obama because what sort of person would try to blow up children.

Beck also cleared up his Mirandized comments from this morning: “Brian Kilmeade, who I love, went all Jack Bauer on me, I swear he’s got nipple clips in his pocket.” Which is Beck’s way of saying he is standing behind his assertion that Shahzad should be treated humanely (i.e. no nipple clips) because he is a citizen. “The Constitution is tough when it gets in the way.”